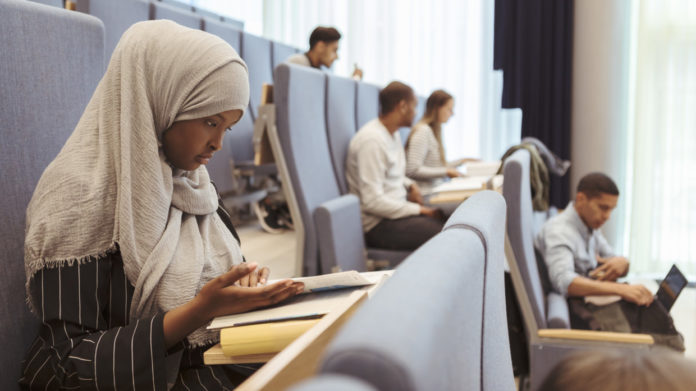 (Hadalsame) 15 August 2020 – King’s College London’s Geography Department has learnt what all schools must know in 2020: it’s not what you study, but how tolerant you look while studying it that gets you funding. Apparently, this means embracing segregation.

Authored in conjunction with Athena SWAN, a gatekeeping ‘gender equality’ NGO, the report blames non-Muslim university staff and students for excluding their Muslim peers, who have the highest dropout and poverty rates of all ethnic groups in the UK. However, the warped form of segregation it suggests as a solution not only perpetuates this exclusion – it kicks it up a notch by enshrining it in university policy.

Just a page after blaming the “hegemonic drinking culture at university” and Islamophobic stereotypes for keeping Muslims on the social fringes of student life, the report suggests colleges must recruit more Muslim lecturers and professors so students can spend all their time with members of their own ethnic group.

Lest the reader misunderstand their intentions, the researchers clarify: student mentoring programs would be “improved if mentees had the option of highlighting different preferences for their mentors – in relation to gender, ethnicity and religion.” Presumably, it’s up to King’s College to have a healthy supply of faculty members in all possible gender/ethnic/religious combinations, sort of like academicBarbie dolls, ensuring no student must suffer the indignity of learning from someone unlike themselves. This, the researchers write, will help “Muslim students feel less isolated.”

Unfortunately, King’s College is not an outlier when it comes to its efforts to exhume the long-dead corpse of segregation and dress it up with the trappings of 21st-century wokeness. Last month, in chutzpah-laden screeds, faculty at both Princeton and the University of Southern California demanded their own variations on “separate but equal,” from requiring black faculty members have their work evaluated only by their “racial peers” to paying minority students to mentor underclass(wo)men of their own race.

Gone, apparently, is the notion that university should be about exposure to new and different ideas, cultures, and people. Indeed, should a student accidentally stumble across an intellectually stimulating and unfamiliar concept in 2020, he or she is likely to cry out in mental anguish and demand a (racially appropriate) counseling session post haste.

It’s a cliche at this point to mock college “snowflakes” – students who’ve lived their lives in a protective bubble crafted by their parents and whose temper tantrums hold entire classrooms (and social media networks, and workplaces) in thrall. However, the utter cowardice of college administrators and most faculty in the face of ‘social justice warrior’ mob bullying has created a positive reinforcement loop wherein non-snowflake students (and even faculty!) see the snowflakes getting what they want and, consciously or otherwise, begin to emulate them. This mind-virus has so thoroughly infected the staff of even storied institutions such as King’s College that there seems to be no turning back.

Worse, research grants in the UK are increasingly doled out based on participation in programs such as Athena SWAN’s. It awards charter marks to schools that pledge to jump through a prescribed series of social justice hoops. “Addressing unequal gender representation across academic disciplines and professional and support functions,” “tackling the discriminatory treatment often experienced by trans people,” and so on have displaced intellectual curiosity and academic excellence at the core of the university experience.

Some of the Geography Department’s recommendations reach far beyond the point of self-parody. Teachers, the report reads, should not just “try to schedule classes around Friday prayer,” but – since the exact hour of that prayer varies “depend[ing] on the sun’s position in the sky” – consult with the Islamic Society on a seasonal basis to adjust class time accordingly.

It’s very telling that the report scarcely touches on the actual course material except to demand more ethnic “diversity” in the curriculum. Like so much of the woke pandering that passes itself off as university education in 2020, King’s College’s outreach to Muslims is concerned solely with appearances – in this case, appearing inclusive (have to get those grants, after all). But there’s nothing inclusive about this bizarre new breed of “woke segregationists” demanding the balkanization of the student body (and society itself) along “intersectional” lines. Appearances have been fetishized so thoroughly, there’s simply no more room for reality on campus. For those who remember their college days fondly as a time of intellectual adventure rather than fleeing for one’s life from the Thought Police, that’s a crying shame.

Disclaimer: The views and opinions expressed in this article are those of the authors and do not necessarily reflect the official policy or position of Hadalsame Media.