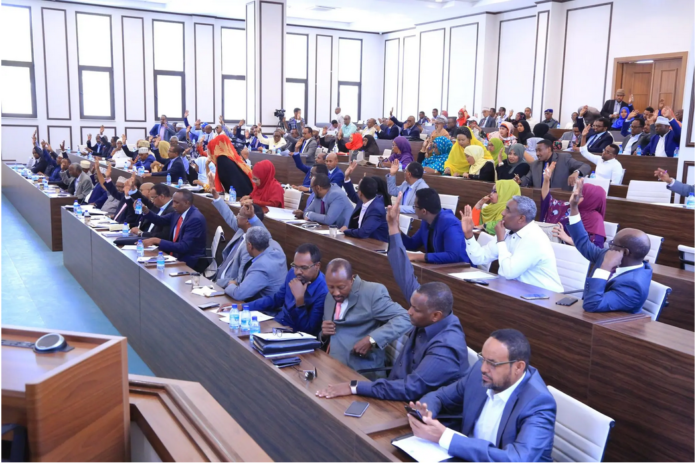 (Hadalsame) 30 July 2020 – Somalia is on the brink of civil war once again. The Horn of Africa nation seems to be cursed with unrealistic and vengeful a diaspora-thinking executive, rogue parliament, non-existent judiciary and divided and the non-assertive international community

On the other hand, it has an extremely overtaxed and exhausted business community and a citizenry that has borne the brunt of State humiliation and the never-healing scars of Al-Shabaab terrorist attacks.

The leadership — the president and prime minister — who have since parted ways acrimoniously, have nothing much to show for their three and a half years in office except making beautiful but hollow nationalistic speeches and huge investment in social media, strategically surrounded by a sycophantic diaspora and hardened former Al-Shabaab fighters.

The scorecard is out for President Mohamed Abdullahi Farmajo and (former) premier Hassan Ali Kheyre. They spent their time fighting federal member states and the media, playing one Arab nation against the other and demonizing neighboring Kenya, which hosts millions of Somali refugees in camps and major urban centers.

By the time the duo realized their overstretched political honeymoon was coming to an unceremonious end and nothing was done to prepare the fragile nation for the 2020/2021 election hardly four months away — except the existence of moribund electoral commission resident in Villa Somalia, they embarked on a rollercoaster campaign for a two-year term extension and a blame game of who is responsible for the mess.

Mr Farmajo, a populist president whose election was initially greeted with excitement and hope, is on the verge of plunging Somalia into an abyss of electoral uncertainty putting the nation once again on the edge of collapse.

He has negated the biggest political milestone Somalia has achieved from 2002 — a road map for the presidential and parliamentary elections that heralded peaceful political transition, unlike in many African nations.

He has adopted confusion and sideshows as his formal policy. Backed by a rogue parliament, he has passed laws committing the nation to one person, one vote while there are no registered voters or to registration mechanism, the citizenship question of who can vote or not, parliamentary seats not properly demarcated, and Al-Shabaab controls large swathes of land in southern and central Somalia, making it difficult to vote his way.

He insists on universal suffrage at a time when the federal government doesn’t assert authority in most of Somalia, including the self-declared independent democratic state of Somaliland.

Parliament, through the machinations of Farmajo, has passed numerous untenable laws — including altering the senate composition by approving 13 senate slots for Banadir region without a guideline on how such slots will be shared or voted for.

Following the failure to chart the way forward on the elections, the leadership of Hirshabelle, Jubaland, Puntland, South West, and Galmudug states held an intra-state meeting in Dhusamareb, central Somalia, where they declared that the polls must be held on time and sought talks with Mogadishu.

Farmajo and Kheyre did join the consultative meeting with the president secretly lobbying his Darod clan states of Jubaland and Puntland to back his term extension.

Kheyre’s diplomatic skills bridged the gap and a consensus was reached on timely elections. A technical committee was picked to design the election model and develop the schedule and will meet again in Dhusamareb by August 15.

The Dhusamereb deal created hope. But the rogue federal parliament, backed by Farmajo and his diaspora cronies and oiled by the Qatari petrodollar, declared a no-confidence “utterance” on the PM without voting, parliamentary procedure or even a motion being tabled.

If Somalis were surprised by the “extraordinary ability” of the Speaker of the Lower House, Mohamed Mursal, to count, in four seconds flat, the 170 MPs who allegedly ousted the PM, they were shocked by Farmajo’s speedy appointment of a caretaker premier 30 minutes later, blatantly disregarding the constitutional provisions.

Farmajo’s actions and omissions will erode the progress Somalia has made since 2002 and dent the credentials of the nation in its vision to rejoin the civilized world. The international community must drop its diplomatic niceties and play a more assertive role to save Somalia from plummeting into chaos, mete out punishment on spoilers in parliament, and Villa Somalia and ensure peaceful elections are held on time.