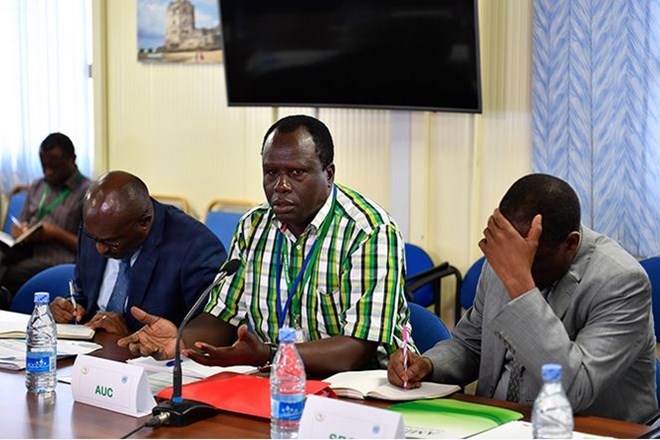 The delegation, which arrived in the Somali capital, on Wednesday, will evaluate steps taken by the AU Mission in implementing tasks under the transition plan as mandated by the UN Security Council Resolution 2431 (2018) and the African Union Peace and Security Council Communique 782 (2018).

“There were some mandates issued by the two councils (UN and AU) to be undertaken by this Mission.  The joint review will definitely be looking at those mandates and also focus on the Somalia Transition Plan,” said Maj. Gen. Francis Okello, the Chief, Plans and Operations Unit in the AU’s Peace Operations Support Division.

UN Resolution 2431 (2018), authorized the reduction of uniformed AMISOM personnel, by 1000, by the end of February, this year. The resolution also mandated AMISOM to maintain a minimum of 1040 police personnel including five formed police units.

The Communique, on the hand, called for an assessment to be carried out on the state and effectiveness of AMISOM reconfiguration and its support to the transition process. It also sanctioned the development of a new Concept of Operations (CONOPS) aligned with the implementation of the transition plan.

Maj. Gen. Okello, who is leading the AU delegation, said the outcome of the review would inform the decisions to be made by the UN Security Council and the African Union Peace and Security Council (AUPSC)  on the renewal of AMISOM’s mandate.

His remarks were echoed by the Team Leader of the UN delegates, Vincent Pasquini, who said the review would look into issues of transition planning, electoral preparations and the operating environment in Somalia.

“The objective of this meeting is really to hear the views of our partners as we set off in this review and to have as many inputs as possible,” said Mr. Pasquini, the Team Leader to Somalia in the UN Department of Political and Peacebuilding Affairs (DPPA) and the Department of Peace Operations (DPO).

The visiting delegation will also seek, among other issues, to establish challenges the AU Mission faces, the status of the implementation of the recommendations of the AMISOM Operational Readiness Assessment (ORA) and preliminary impact of the reduction of AMISOM troops.

During the week-long visit, the delegation will meet with the AMISOM senior leadership, officials from the Federal Government of Somalia, the United Nations, representatives of international partners, diplomats from AMISOM Troop Contributing Countries and the European Union.

The delegation will also hold discussions and analyze Somalia’s political and security situation as the country prepares for one-person, one-vote elections in the 2020-2021 period.

The Special Representative of the Chairperson of the African Union Commission (SRCC) for Somalia, Ambassador Francisco Madeira, welcomed the delegation to the Mission Headquarters in Mogadishu, adding that the visit demonstrates the importance of AMISOM.

“This is an important opportunity for us to share with you issues on Somalia and also listen to you and get to know your views and your concerns and most importantly your views should guide us on the way forward in our joint effort to help Somalia achieve peace and stability.”

During the joint review meeting held in May, last year, the Federal Government of Somalia reiterated its commitment to assume security responsibility as stipulated in the transition plan.

It urged the review team not to judge the country by its past but by achievements so far made in stabilizing the country.