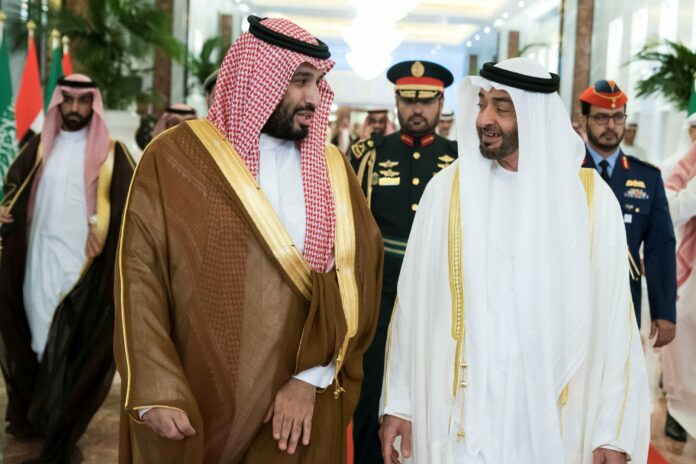 (Hadalsame) 07 July 2021 – A rare public disagreement has occured between the United Arab Emirates (UAE) and Saudi Arabia over the Organization of the Petroleum Exporting Countries (OPEC) policy. Several regional analysts noted that this points to a growing economic rivalry between the two largest Arab economies, which only looks set to intensify.

The disagreement led the talks between the OPEC and its allies, known as OPEC+, to be called off on Monday.

In their clash, Saudi Arabia sought to maintain output curbs, while the UAE has pushed for increased output.

No date has been set for the next OPEC+ meeting, which has left some sources speculating there would be no output increase in August, while others expect the group to convene a new meeting within days to secure an agreement.

The alliance between the young ambitious princes had propelled a hawkish foreign policy that saw them launch a military campaign in Yemen, lead an Arab boycott of Qatar and combat Islamist political groups in the Middle East and beyond.

But as Saudi Arabia tries to wean its economy off oil, it is vying with the UAE for foreign capital and talent. However, economists say it will take time to truly challenge the region’s business, trade and tourism hub.

“There is this creeping economic competition in the relationship between the two biggest Arab economies and the competition is bound to intensify,” said Emirati political analyst Abdulkhaleq Abdulla.

“The UAE is speaking its mind … But the relationship is strong and the leadership knows how to resolve issues,” he said.

While common perceived threats from Iran and Islamist groups in the region are likely to keep a lid on political differences, analysts say the two states are seen as likely to increasingly butt heads on matters of economic sovereignty.

Riyadh has warned foreign firms they could lose out on state contracts if they do not set up regional headquarters in the kingdom by 2024. In another challenge to the UAE’s status as the region’s trade and business hub, this week it amended rules for imports from Gulf states to exclude goods made in free zones, a major driver of Dubai’s economy.

Several diplomats in the region have said the UAE-Saudi alliance has gone as far as it can, as national economic interests take precedence, especially in the wake of the COVID-19 pandemic.

The first indication of a parting of ways came in 2019 when the UAE withdrew its military presence in Yemen, leaving Riyadh mired in a costly war that directly threatens its security. Abu Dhabi still maintains sway via Yemeni forces, some of whom have challenged Yemen’s Saudi-backed government.

The UAE has also dragged its feet on a deal announced by Saudi Arabia in January to restore political ties with Qatar as Riyadh moved to ease friction with U.S. President Joe Biden over its human rights record and Yemen.

While the UAE last year forged ties with Israel in a move that enjoyed bipartisan support in Washington, Riyadh has, in contrast, made tentative moves to improve its relationship with Turkey.

But the UAE and Saudi remain bound by concern over Iran’s expanding influence via regional proxies and security threats that pose a risk to their economic ambitions.

The UAE started engaging with Iran in 2019 to ease tensions after attacks on tankers in Gulf waters and on Saudi oil plants that Riyadh blamed on Tehran, a charge it denies.

This year, the kingdom followed suit, launching direct talks with Tehran over Yemen, where they are locked in a proxy conflict. The move came as Biden sought to revive a nuclear deal between global powers and Iran that Riyadh opposed for not tackling Iran’s missile capabilities and regional activities.

“The potential U.S.-Iran detente, the energy transition, and competition in non-oil diversification makes for a particularly challenging period of divergence this time round,” Hasnain Malik, head of equity strategy at Tellimer, said of Saudi-UAE relations.

Saudi National Bank’s Khan said the UAE, which has invested heavily to boost oil output capacity, wants to move quickly to monetize reserves given a global push away from fossil fuels.

Saudi Arabia is in greater need of price stability to deliver on the domestic mega projects that its sovereign wealth fund largely drives.

“Now you can see head-to-head confrontation, and the UAE is punching above its weight,” one foreign diplomat in Riyadh said of the OPEC disagreement. “This is the first time the two countries exchanged public and strongly-worded accusations.”