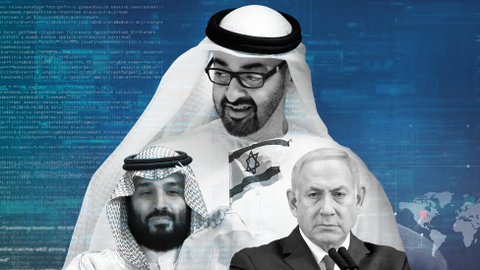 Most Arab states are quick to deny any official or covert ties with Israel, but were unable to keep the lid on their dealings with Tel Aviv for too long. Israeli Prime Minister Benjamin Netanyahu himself has gone on record revealing that his country maintains unofficial ties with a broad range of Arab states.

On September 7 2017, the official Arabic-language Israeli radio reported: “An Emir of the Saudi royal court visited the country secretly and discussed with senior Israeli officials the idea of pushing forward regional peace.”

The mysterious visitor was later confirmed to be none other than Saudi Crown Prince Mohammed bin Salman himself, according to an Israeli official who spoke to AFP anonymously.

But Saudi Arabia’s ties to Israel run deeper than that. In October 2018, Saudi Arabia reportedly purchased over $250 million-worth of spy equipment from Israel, according to an exclusive report from Al-Khaleej Online. The deal, mediated by the US and included training a Saudi team in operating state-of-the-art espionage equipment, as well as strategic military exchanges.

The Saudi Crown Prince has also previously stated that Israelis are entitled to live peacefully on their own land, in an interview. This is in spite of Saudi Arabia’s insistence that normalising relations with Israel requires Israeli withdrawal from Arab lands captured in the 1967 Arab-Israeli war.

Following a secret meeting in the US between Emirati, Israeli and American security officials on Iran, Abdullah bin Zayed Al Nahyanl Nahyan, the UAE’s top diplomat, tweeted a link to an article titled “Islam’s reformation: an Arab-Israeli alliance is taking shape in the Middle East”.

But this has been a long time in the making.

In August 2018, the UAE contracted the secretive Israeli NSO Group to spy on dissidents, turning their phones into surveillance devices through the use of spyware. The same hacking collective would later be used by Saudi Arabia to surveil and assassinate Saudi journalist Jamal Khashoggi.

Soon after, while Israeli Prime Minister Netanyahu visited Oman in late October 2018, Israeli Minister of Culture Miri Regev was on a four-day visit to Abu Dhabi.

Regev is a hardline conservative with a reputation for racist, provocative statements even within Israel. She was welcomed by local officials and given a tour of the Sheikh Zayed Grand Mosque alongside UAE officials the next day.

The Israeli minister has often been the subject of controversy, posting a video featuring genocidal chants like, “may your village be burned”, and calling migrants “a cancer”.

He would later meet Israeli Prime Minister Benjamin Netanyahu in a ‘chance encounter‘ at a restaurant in May 2018, where they discussed Iran in depth.

“Gulf countries, Israel and the countries in the immediate vicinity are the ones at immedi­ate risk [from Iran],” he said.

Throughout the 1950s and 1960s, Egyptian President Gamal Abdel Nasser’s Egypt maintained, “no peace with Israel, no recognition of Israel, no negotiations with it” — a rallying cry that most Arab countries would adhere to for decades. But not Egypt.

Security cooperation notwithstanding, Israel exports natural gas to Egypt after a $15 billion deal signed in 2018.

Egypt’s top generals have worked closely with their Israeli counterparts since the Camp David accords of 1978. Egyptian security forces work with Israel to enforce restrictions on movement in and out of the Gaza Strip, while Egyptian and Israeli intelligence cooperate actively.

Emmanuel Nahshon, Israel’s Foreign Ministry spokesman also called Jordan “a strategic partner, and have every intention of assisting and cooperating”.

Israel itself acknowledges informal ties with Jordan. Ayoob Kara, Israel’s Minister of Communications emphasised: “There are a large number of Arab countries that have ties with Israel in one way or another, starting with Egypt and Jordan.”

Oman has held cordial ties with Israel as far back as 1994, and tried to leverage its position as a mediator between all.

Netanyahu allegedly attempted to arrange a three-way agreement where the United States would recognise Moroccan sovereignty over the disputed Western Sahara. The caveat? Morocco would have to take steps to normalise relations with Israel.

When asked about the secretive meeting, Morocco’s Foreign Minister Nasser Bourita refused to provide comment on the alleged Israeli support in exchange for normalised ties.

But the tit-for-tat deal didn’t emerge from a vacuum.

In late January 2020, Morocco’s military  signed a deal for three Israeli drones for a total of $48 million, according to Intelligence Online.

As far back as 1986, King Hassan II invited then Israeli Prime Minister Shimon Peres for talks, becoming the second Arab leader to host an Israeli leader after Anwar Sadat.

After a deal was reached in September 1993, Morocco accelerated economic ties and political contacts with Israel by opening bilateral liaison offices before closing them in 2000.

It’s no secret that the Kingdom of Bahrain and Israel are closely aligned on many regional issues, despite not having official diplomatic relations. Relations between these two Middle Eastern countries date back, at least, to the 1990s.

Yet today there is growing openness between Bahrain and Israel which reflects the extent to which Manama and Tel Aviv find themselves in the same boat regarding many regional issues, mainly stemming from their shared perceptions of the Islamic Republic of Iran as a grave threat to their interests.

Bahrain and Israel’s move toward a more normalised relationship was made public in August 2019 following Israeli military strikes against Iraq, Lebanon, and Syria.

Bahrain’s Foreign Minister Khalid bin Ahmed Al Khalifa jumped to Israel’s defence by stating: “Iran is the one who has declared a war on us, with its Revolutionary Guards Corps, its Lebanese party [Hezbollah], its Popular Mobilization Forces in Iraq, its Houthi arm in Yemen and others. So one who strikes and destroys their piles of ammunition is not to blame. This is self-defence.”

Not to be outdone, he cited Article 51, Chapter Seven of the UN Charter, defending Israel’s right to protect itself from “any threat or aggression”.

Netanyahu quickly announced the outcome of the meeting, declaring “History!,” in a tweet.

In a landmark agreement, Netanyahu and Burhan “agreed to start cooperation leading to normalisation of the relationship between the two countries”, according to an Israeli government statement.

A senior Sudanese military official speaking to the Associated Press said the meeting was orchestrated by the UAE, while emphasising only a “small circle” of top ranking officials in Sudan, Saudi Arabia and Egypt knew about Burhan’s meeting with Netanyahu.