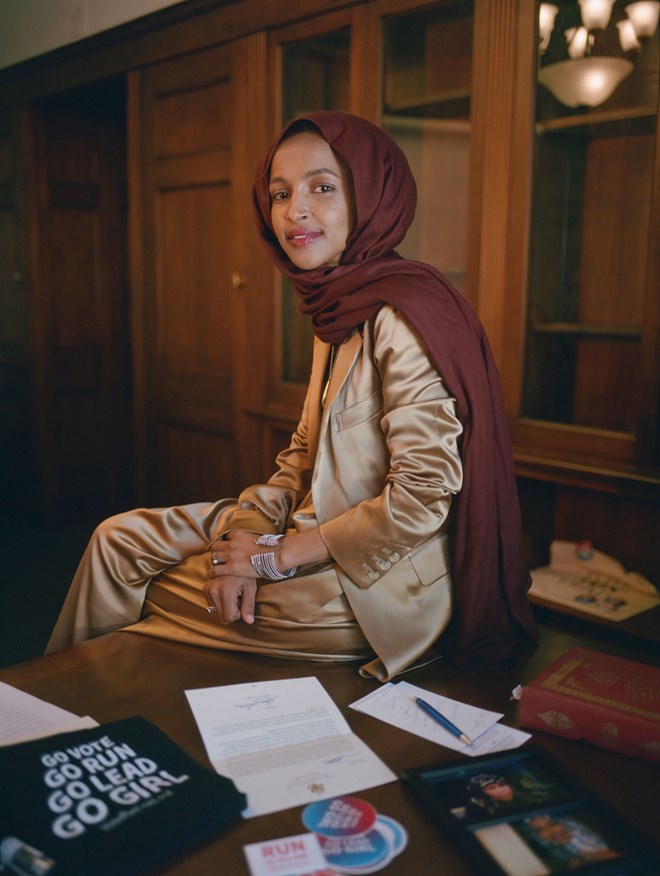 (Hadalsame) 05 March 2019 – For the first time in recent history, perhaps ever, the United States Congress is fun to watch. This has been the case since the midterm elections last fall, when a so-called “blue wave” washed in a Democratic sea of women, first-time campaigners, teachers, bartenders, progressive city council members, and, in the case of Minnesota’s Ilhan Omar, a first-generation refugee from Somalia and devout Muslim. During the 36-year-old freshman’s first months in office, she has pushed her way through the House’s staid “decorum” as well as its institutional racism.

From her victory speech in 2018, which she opened with the Islamic greeting “As-Salaamu-Alaikum,” to her pushing to overturn a 181-year House rule banning headwear on the floor (Omar wears a hijab), her religious leanings have been an obsession for her detractors, such as the Republican pastor who claimed Congress “is now going to look like an Islamic republic.” The fixation on Omar and her peers Alexandria Ocasio-Cortez, Ayanna Pressley, and Rashida Tlaib has obscured the strides they’ve made to bring a new perspective to Congress. In a now-viral clip, Omar grilled President Donald Trump’s new special envoy to Venezuela, a career State Department official named Elliott Abrams, about his past involvement in human rights violations in El Salvador (“Do you think that massacre was a fabulous achievement that happened under our watch?”).

As Omar puts it to the Oscar-nominated filmmaker Ava DuVernay, she is simply making “good trouble.” —NATHAN TAYLOR PEMBERTON

DUVERNAY: I read that you caught 11 fish at the Minnesota Governor’s Fishing Opener? Now, listen. I’m from Compton. What is going on with a colored girl fishing?

OMAR: That is the most-asked question. The idea that there are colored girls outperforming midwesterners at fishing is not a thing.

DUVERNAY: I love it.

OMAR: When I was in the Minnesota House, we’d do a big fishing tournament every year. The governor has a boat and the lieutenant governor has a boat. I got invited once, and I joked with them that they just invited me to be like, “Oh, here’s this new member who’s an immigrant.” They just thought that I’d drink my tea and sit in the boat. They didn’t imagine that I could come from a family of fishermen. The country I was born in has one of the longest coastlines in Africa, so fishing was very much part of our family tradition. As soon as I threw my fish hook, it was magic. I think my grandfathers were whispering to the fish and making sure that their granddaughter was defending their legacy.

DUVERNAY: The fish were like, “Let’s help make this happen.”

OMAR: It was the most fish that have been caught by a single person in the history of the fishing opener.

DUVERNAY: When I’m introduced to people, I get a lot of, “She’s the first black woman to have ever had a film nominated for an Oscar for best picture,” or, “She’s the first black woman to win Sundance.” I’ve come to have a really complicated relationship with being the “first” of my kind. Considering that you’re the first of so many things, I want to know what your relationship with being first is. Are you good with it, or is it complicated for you?

OMAR: I have a complicated relationship with it, internally and externally. There are people who don’t celebrate it in good faith and just want to have that be the box you’re in—like a qualifier for your success. There isn’t really much discussion about your character or your qualifications and the worth and perspective that you bring to the work. You get to feel like you’re drowning in it, because you don’t want to mess this first thing up for everyone you want to hold the door open for. It has a negative weight.

DUVERNAY: I’m actually not the first woman capable of doing these things. I didn’t just come off of a star or a moonbeam to all of a sudden be the first black woman who could do this. It’s the time we’re in that created the space for us. But even though we’re first, the goal is to make sure that we’re not the last, right?

OMAR: In a way, it can be seen as people wanting to pat themselves on the back—like, “We got one!” I appreciate the fact that I have the opportunity to do this for the first time. But having that be the focus means that we’re taking away from everyone else who is equally capable, who has a perspective that is beyond their identity. I want to make sure that people don’t think that I must represent all the voices of just Muslim women, or African women, or African people. I want to make sure that people understand that it’s Ilhan who represents these identities. It’s not the identities who represent Ilhan. It’s so complicated. It’s a pile of soup in my head.

DUVERNAY: One thing that doesn’t have anything to do with your faith or your gender is the fact that you won your seat by the largest margin of any woman in history. How does that happen?

OMAR: That’s been one of the least talked about things.

DUVERNAY: It’s the one thing that’s a direct product of your work, your labor, your strategy, your platform, your words, your passion. The other things are happenstance, really. You didn’t dictate being the first. It could have been someone two years before or ten years after. 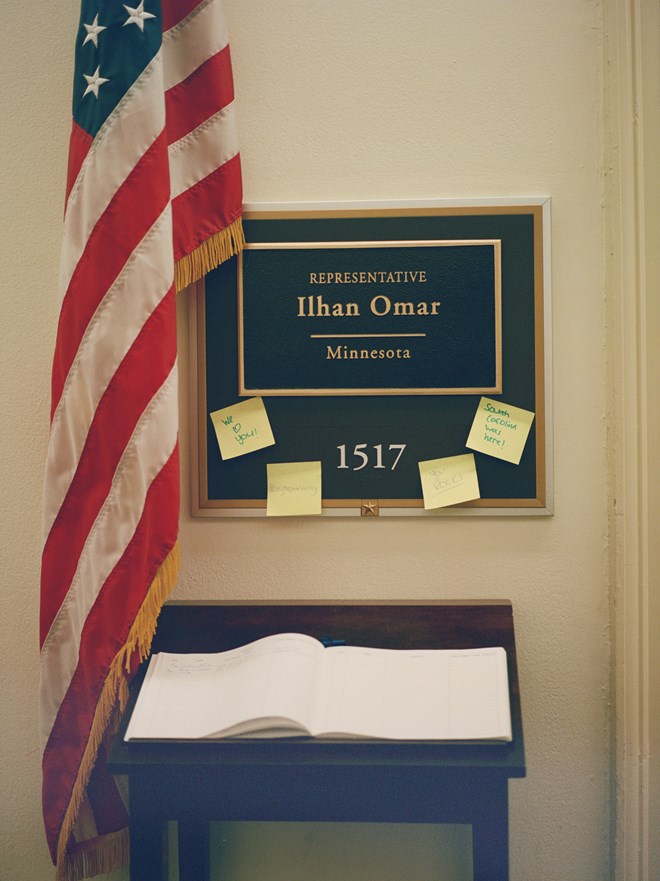 OMAR: We didn’t even know that we outperformed 428 districts around the country in voter turnout. I truly believe it’s about organizing and believing that the voices of everyone that you’re seeking to represent should have a seat at the table. There are a lot of people who will campaign on the idea of not leaving a vote on the table, but who won’t reach every single person in their district to make sure that that’s actually happening. People in our district really felt that they were being invited to participate in their democracy, and they joined in. I always say that excitement is intoxicating, and we were able to translate our excitement into a huge voter turnout.

DUVERNAY: Social media helped me connect with all of the congresswomen who got elected in 2018. You and your sisters in Congress have turned the stereotype of what a congressperson is on its head in a very short time. Is it just a product of, “Hey, I’m a young woman and I use social media”? It’s become a real hallmark of your presence in Congress.

OMAR: Social media has been a part of our normal day-to-day lives. I remember watching some of these candidates like Rashida Tlaib and sharing her stuff on social media. Before I met Alexandria, my daughter and husband mentioned this young woman who was running and challenging an incumbent, so I followed her on Twitter. Then she followed me back. I inboxed her and I was like, “You’ve got this. It’s worth working for everything that’s worth having and keep your head up.” I remember being excited about Jahana Hayes out of Connecticut and pushing for Ayanna [Pressley] when the Black Caucus wasn’t yet on board. I was just cheering for these women running their races. But when I joined the race, I became a part of this amazing group of people who were not only speaking to the progressive values that I cared about, but who were also people I could be in solidarity with. When our day to day was filled with lots of struggle, it was good to share something or see others share and just send the positive vibes.

DUVERNAY: I see you all together and I imagine that it’s this great sisterhood, where you see each other in the halls and on the floor. Can you just take me behind the curtain a little bit?

OMAR: There are lots of text threads. There is a lot of hugging and high-fiving. We are also developing a sisterhood with many of the members who are our seniors here. There is this tradition here of men going to have their cocktail hours to drink their scotch and do their plotting, but being these very untraditional members of Congress, we have the opportunity to care about the well-being of one another, including the well-being of the people we represent. We understand that we don’t have a lot of time to sit around. We’re creating good trouble, and we’re going to need one another.

DUVERNAY: Who knows what those men are doing with their scotch. I never know, and I never want to know.

OMAR: I haven’t been invited to those parties yet.

DUVERNAY Whatever they do, one of the things that they don’t experience is the constant nitpicking of everything they say. While you’re talking about the idea of leadership and being in Congress, you all have this additional layer of the scrutiny. It’s unprecedented. It could be very destructive and harmful, too. Each of the women who has come in with this new wave is enduring this takedown culture. How are you managing that and still doing your work?