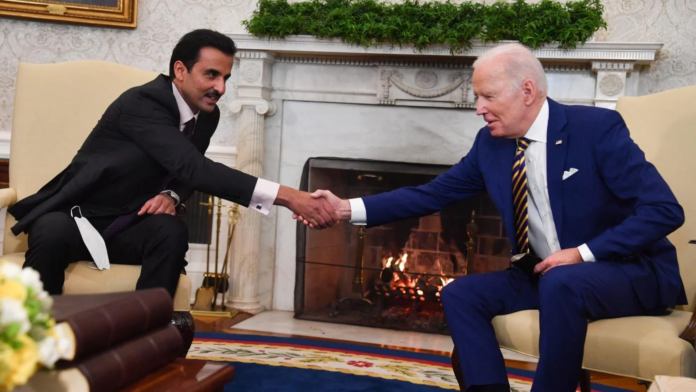 (Hadalsame) 23 Feb 2022 – Doha’s elevated status is a signal to Riyadh and Abu Dhabi that aggressive regional strategies will not be rewarded by Washington.

Qatar was designated a major non-Nato ally by the United States before Saudi Arabia or the United Arab Emirates because of the unique role Doha plays in aiding Washington’s interests in the Middle East and beyond, experts have said.

A year after it overcame a three-and-a-half-year blockade by several of its neighbours and Egypt, the Biden administration announced that Qatar would become the third country in the Gulf to receive the designation, joining Kuwait and Bahrain – longstanding US allies.

“Qatar is a good friend and a reliable and capable partner,” US President Joe Biden said on 31 January before meeting Qatari Emir Sheikh Tamim bin Hamad Al Thani at the White House.

“I’m notifying Congress that I will designate Qatar as a ‘major non-Nato ally’ to reflect the importance – the importance of our relationship. I think it’s long overdue.”

“This past year, our partnership with Qatar was – has been central to many of our most vital interests: relocating tens of thousands of Afghans, maintaining stability in Gaza and providing lifesaving assistance to the Palestinians, keeping pressure on ISIS and deterring threats across the Middle East,” Biden said.

The State Department describes the non-Nato major ally designation as “a powerful symbol of the close relationship the United States shares with those countries and demonstrates our deep respect for the friendship for the countries to which it is extended”.

Conferring the status of “major non-Nato ally” does not guarantee Washington will come to Qatar’s defence in the event of an attack. But the designation does give Doha more diplomatic prestige and access to technology, security systems and training by US defence forces that were not previously available to it.

Only 17 other countries have been granted this special status, but the Biden administration’s decision to confer it on Doha before either Riyadh and Abu Dhabi – two other major US allies in the region – has raised eyebrows.

Mustafa Gurbuz, a senior faculty member at the Arab World Studies programme at the American University in Washington DC, suggested that Qatar’s decision to not immerse itself in the deeply unpopular war in Yemen and the assistance it provided during the US’s hasty withdrawal from Afghanistan last summer, likely elevated its status in the eyes of the Biden administration.

“Biden is on the path to correct some severe mistakes that plagued Trump’s White House,” Gurbuz told Middle East Eye.

“Under the influence of powerful lobby groups, the Trump administration pursued a policy to isolate Qatar – only to witness harmful outcomes for the US interests in the region.”

‘Political Islamism is no longer perceived as a major threat’

Saudi Arabia, along with Bahrain, the UAE and Egypt, cut all ties with Qatar in June 2017 over allegations that Doha was too close to Iran and funding radical Islamist movements, charges Doha staunchly denied.

They subsequently forced out Qataris residing in their countries, closed their airspace to Qatari aircraft and sealed their borders and ports, separating some mixed-nationality families.

Last January, the kingdom announced it would restore full ties with Qatar after Doha froze all state-related legal action against the countries.

Gurbuz described Biden’s decision as “reflective of the geopolitical shifts in the region. Political Islamism is no longer perceived as a major threat”.

He also pointed out that for the US, having strong bilateral ties with multiple countries in the Gulf “is a clever strategy, especially at a time when the perception of US withdrawal from the region is widespread”.

Aggression will not be rewarded

Ryan Bohl, a Middle East and North Africa analyst at RANE, the risk intelligence company, similarly believes that Qatar attained this designation “largely because its regional activities have not undermined US strategies or gone against stated US priorities”.

“For example, the Emiratis in Yemen went against US efforts to keep that country from splitting in two and also undermine US efforts to resurrect diplomacy there,” Bohl told MEE.

“Qatar’s designation was not only a reward for Afghan evacuations but also a signal to Saudi Arabia and the UAE that their more aggressive regional strategies – including the blockade of Qatar – would not be rewarded by the US,” he said.

“It’s also a reward for Qatar buying US military gear and not creating concern about how Qatar uses it – as opposed to the UAE,” he added.

“From Afghanistan, to aid in the Gaza Strip, to Qatar’s role mediating with Iran, the US has had many reasons to want to give Qatar this designation,” Bohl said.

Furthermore, by implementing policies that the current US administration finds objectionable, Saudi Arabia and the UAE may have unwittingly played a role in hastening this designation.

“I very much think that the UAE and Saudi Arabia’s aggressiveness in the region, especially in Yemen but also with human rights; the murder of Jamal Khashoggi; abduction of Lebanese Prime Minister Saad Hariri; Libya; the blockade of Qatar; and their close association with the Trump White House, all fuelled this designation,” Bohl said.

Ali Bakir, a research assistant professor at Qatar University’s Ibn Khaldon Center, said Doha was most likely rewarded with the designation because it was “the most stable, mature, reliable, and credible partner in the Gulf”.

“Others might have qualities that qualify them to be in such a position, yet their malign behaviour and dark agenda, as well as their unstable performance, might have deprived them of such designation,” Bakir told MEE.

“Qatar’s most recent critical role in Afghanistan and helping the US evacuate the country, among other issues, is proof of Doha’s capacity and willingness to help stabilise the region and evade disastrous consequences.”

Bakir also noted rising tensions between Russia and the West over Ukraine and the possibility that Moscow may cut gas supplies to Europe “might have played a role in relation to the US designation”.

“Having said this, it was a matter of time before Doha gets this designation anyway, given that Qatar is a major US ally that hosts the biggest US base in the Middle East,” he said.

The designation could fuel worries in Abu Dhabi and Riyadh that they are being displaced as the United States’ preferred partner in the Gulf region.

“This designation might upset some regional countries that sought to blockade Qatar and undermine its sovereignty, value, and role in the eyes of the US,” Bakir said.

“In other words, the US designation of Qatar as a major non-Nato ally is not quite the designation they wanted for Doha.”