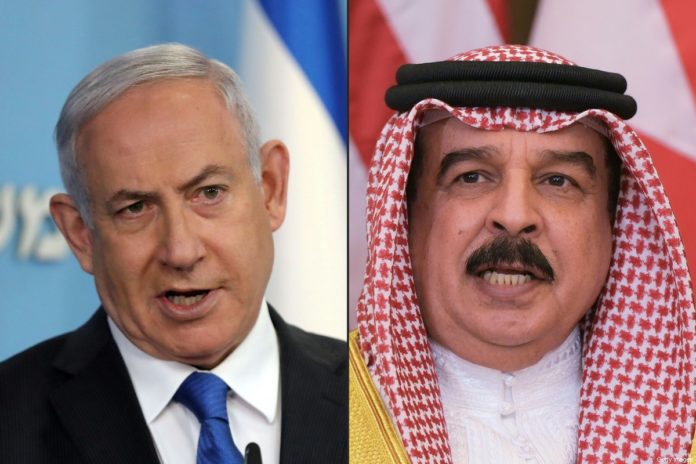 (Hadalsame) 14 Oct 2020 – Israeli Prime Minister Benjamin Netanyahu is not interested in discussing Israeli strategy with any Arab country. Nevertheless, with their silence and headlong rush towards normalisation, too many Arabs are contributing to Netanyahu’s vision for the region, and its goals are being achieved daily.

Israel, for example, has signed new deals with the UAE and Jordan. The first is an agreement to start cultural cooperation; the second is an agreement to export oil from the UAE to Israel; and the third is for Jordan to join Saudi Arabia in allowing Israeli aircraft to pass through their airspace to shorten the flight time between the Gulf and the occupation state. These agreements not only facilitate normalisation, but also fall within the larger framework of Netanyahu’s strategy, which intends to neglect the Palestinians and deal direct with regional Arab and other states, with the aim of integrating his country into the Middle East as a “genuine state” until the Palestinians stand alone in an area dominated by Israel.

All normalisation which follows fake “peace” deals is in the best interest of the Zionist project, so it is not necessary to support the UAE, Bahrain and Israel agreements overtly, as maintaining any relationship with the occupation state not only helps to implement the so-called Abraham Accords, but also implies their acceptance. How can Jordan continue to reject the liquidation of the Palestinian cause as well as the Zionist annexation of occupied Jerusalem and the West Bank, and yet sign an agreement that expedites the integration of Israel in the region? Furthermore, all the economic normalisation agreements signed between Amman and Tel Aviv make Jordan a bridge for normalisation with the Gulf and the rest of the Arab world. This poses a threat to Jordan’s national security as a breach of its sovereignty, and makes it unable to say “no” or hesitate about any Israeli plan that threatens it.

Netanyahu’s strategy depends on neglecting the Palestinians and getting each Arab country to submit separately to a relationship with Israel. This will change the political map of the region gradually, so that Israel becomes “indigenous” and Palestine is the intruder whose people are besieged, leaving it no other choice but to surrender. This strategy is not completely new; there has long been a debate in Washington about trying to remove the Palestinian issue from the centre of Arab discourse as a stepping stone to the subjugation of the Palestinians, leading to the completion of the Zionist project under the slogan of “coexistence and peace”.

Successive US administrations have generally ignored the Palestinian issue — they actually ignored the very existence of the Palestinians — and some Arab regimes “contained” them until the PLO emerged, especially after 1969. US officials then began to say “Palestinian” followed immediately by the word “terrorists”. This was an attempt to eliminate the PLO and led to support for the Israeli invasion of Lebanon and siege of Beirut in 1982. They wanted to move the Palestinian resistance away from the countries confronting Israel. Moreover, US President Ronald Reagan put forward an initiative that did not recognise the right of the Palestinian people to self-determination, and demanded official Jordanian representation for them within the framework of a joint Jordanian-Palestinian delegation led by Jordan, which was rejected by the Palestinians.

The US position did not fundamentally change, even after it opened a dialogue with the PLO under the pressure of the first Palestinian uprising. Even after the 1993 Oslo Agreement and the establishment of relations with the PLO, the US realised that the conflict can only be ended with some solution to the Palestinian issue, but it still didn’t acknowledge the national and historical rights of the Palestinian people.

This was essentially an acknowledgment that no Arab state is capable of bypassing the centrality of the Palestinian cause, including the regimes colluding against the Palestinian people. However, the American-Israeli strategy relied on subjugating the Palestinian people, under the umbrella of “the peace process”, while the Zionist occupation and colonisation of Palestine continued unabated. Oslo allowed Israel to break the global isolation it was facing and establish relations with countries that previously did not recognise it, as well as restore its relations with countries that had severed links after the 1967 war.

The debate continued over the approach to integrating Israel in the region, with the choice between a final Palestinian-Israeli agreement resulting in permanent links between Israel and the Arab countries, and a gradual normalisation with the Arab countries that leads to the isolation and defeat of the Palestinians. Amongst even the most important supporters of Israel in Washington, peace with Palestine, or at least preserving the potential for a two-state solution, and the establishment of a Palestinian state without genuine sovereignty, was seen to be the key to winning over the Arab regimes and people to accept Israel in the region.

This is why the US right wing has focused on the Gulf and its important wealth in order to use it to put pressure on Jordan and the Palestinians to accept all Israeli demands, and move from covert and even overt relations to complete normalisation. Herein lies the danger of the UAE-Israel agreement, especially with the speed of subsequent agreements and the continued negativity towards Palestinians in the UAE media and promotion of the Israeli narrative. The agreement has altered the equation and reinforced Netanyahu’s strategy by neglecting the Palestinians and boasting other achievements, such as the creation of the gas forum in the Middle East, which put Israel in an alliance that includes Egypt, Jordan, Greece and Cyprus, all of which were once enthusiastic supporters of the Palestinians.

Netanyahu has succeeded now thanks to official Arab silence and complicity, with normalisation justified by each country, including those who think that they are still committed to the Palestinian cause, because they have not yet reached the depths to which the UAE has plummeted. What they all forget, though, is that the Palestinians will have the final word, and the price for this gradual surrender could be very heavy for everyone.

The views expressed in this article belong to the author and do not necessarily reflect the editorial policy of Hadalsame Media.