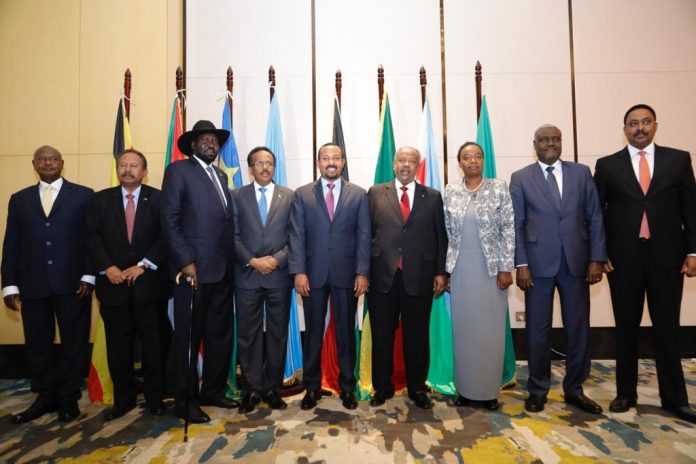 (Addis Ababa) 01 Dec 2019 – The President of the Federal Republic of Somalia, H.E President Mohamed Abdullahi Farmaajo has welcomed the restructuring of the regional body, IGAD which was agreed by the leaders following the conclusion of the 13th Ordinary Assembly of Heads of State and Government in Addis Ababa, Ethiopia.

The Federal government of Somalia, in recognition of the body’s strategic role and with an understanding of the development opportunities, cooperation and trade partnership, has maintained its advocacy for reforms and restructuring on the composition of IGAD so as to represent the views of the citizens and the public of the member states while remaining a platform that captures the interests of the region and all its stakeholders, especially, in key areas of the economy and the politics of its member states.

President Farmaajo on his part submitted his congratulations to the new Chairman of IGAD, H.E Abdallah Hamdook, the Prime Minister of the Republic Sudan who took over the chairmanship of the strategic institution. H.E President Farmaajo expressed his belief in the new leadership of our brotherly nation of Sudan while also acknowledging PM Hamdook’s input to Somalia’s economic reforms while serving as a member of Somalia’s National Economic Council. Furthermore, H.E President Farmaajo also offered his congratulatory message to Dr. Workneh Gebeyehu the new Executive Secretary of IGAD while also assuring the new leadership of full cooperation and support from the Federal government of Somalia for the successful fulfillment of the organization’s strategic vision and core goals and for the region’s progress and prosperity.

The government and the people of the Federal Republic of Somalia remain committed to playing their part to strengthen cooperation with fellow IGAD member states in order to contribute to regional development and prosperity owing its longstanding role as a proud founding member of IGAD.