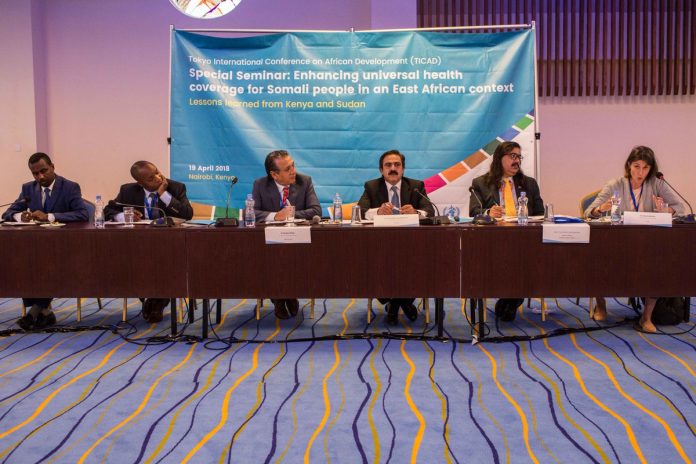 (Hadalsame) 19 Sebt 2019 – The World Health Organization (WHO) has pledged to work with health authorities in Somalia to strengthen primary health care services and improve the capacity of national health workers.

Ahmed Al-Mandhari, WHO regional director for the Eastern Mediterranean who ended his first visit to Somalia, said the UN health agency will focus on mental health care, maternal and child health care, and communicable and noncommunicable disease control.

“I urge our donors to recognize the political will that has been demonstrated to ensure the well-being of all Somalis, and to invest in the future of Somalia through the health of its people,” said Al-Mandhari in a statement issued on Tuesday evening at the end of his visit to the Horn of Africa nation.

While in Somalia, Al-Mandhari said he launched the country’s roadmap to universal health coverage (UHC) and later met with representatives of UN agencies, health leaders and partners, displaced Somalis, and health workers to review the health response and identify ways of strengthening WHO’s work in the country.

Through its UHC roadmap, WHO said Somalia aims to increase the number of people who have access to health services, especially the poorest and those living in hard-to-reach areas so that no Somali is left behind.

Al-Mandhari called for the allocation of more resources in order for UHC to become a reality in Somalia, which he said is a key player when it comes to advancing the health agenda in the region.

“In the past five years, the country has made key advances in eradicating polio, controlling measles and cholera, and reducing maternal mortality rates,” said Al-Mandhari.

According to WHO official, Somalia is a wealthy country with a lot of potential not only its history and natural resources but also in its people, noting that leaders, UN agencies and health partners are committed to working together to meet the expectations of Somalis.

In his meetings with UN officials in Mogadishu, Al-Mandhari advocated to put health at the centre of the humanitarian health agenda in Somalia, stressing that good health and well-being were the key foundations of a prosperous society.

More than 30 years of civil war, coupled with natural disasters such as drought and floods, have weakened Somalia’s health system and left more than three million Somalis in need of health aid, WHO said.

The UN health agency says famine and insecurity have contributed to the spread of malnutrition and disease outbreaks, and lack of access to health care has resulted in Somalia having some of the lowest health indicators in the world.

“During my visit, I met Somalis who have shown great resilience, despite the many challenges they have faced. I met children suffering from malnutrition, chronic diseases and other conditions being treated in clinics and facilities supported by WHO and partners,” said Al-Mandhari.

“I also met front line health workers who are dedicated to helping their people no matter the difficulties — our job is to support them, so that they can continue to save lives everyday,” said Al-Mandhari.