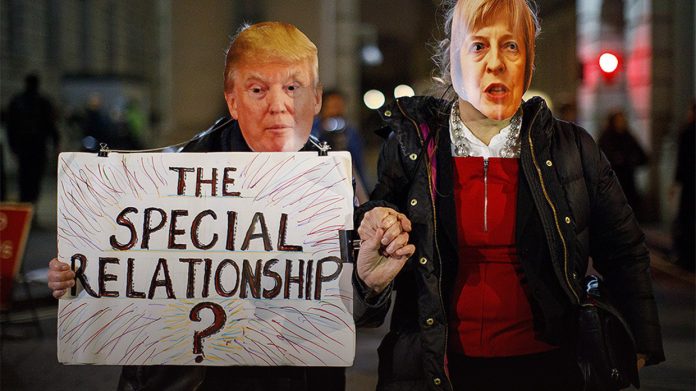 (Hadalsame) 09 July 2019 – In short order, since 2017, the British government has alienated the remaining 27 countries of the European Union whilst simultaneously making enemies of much of the rest of the world.

It is an unprecedented record of recklessness, a trail of wreckage to make a superpower blush, never mind a small island off the northwest coast of Europe, which can’t even afford to pay its bills.

Now the British ambassador, in whom what passes for the country’s prime minister has “full faith,” has contrived to become persona non grata in the United States of America. Such a “special relationship.”

The definition of an ambassador, said Sir Henry Wotton, a 17th century politician and diplomat, was “an honest gentleman sent to lie abroad for the good of his country.”

Whether her majesty’s finest in Washington (at the time of writing), Sir Kim Darroch, is an “honest gentleman” is a matter for debate – he was, after all, formerly a right-hand man of Tony Blair. And whether he was lying about the collective nervous breakdown in the White House or not, he certainly has proved no good for his country.

If you are going to send back to London a stream of venomous ad hominem abuse about the president of your closest ally, you jolly well best be sure it doesn’t all end up on the front page of a mass-circulation newspaper. But it did.

How it did will now be a matter for a “police” investigation (more likely the security service MI5) and it may be further evidence of the collapse of the integrity of Britain’s once-cherished civil service. There already is a full inquiry underway into senior civil servants briefing – for partisan purposes – another, less well-read newspaper, the Times, about the state of mind, body and soul of the leader of her majesty’s opposition, Jeremy Corbyn.

Or it may have been supporters of the erstwhile foreign secretary seeking to clear the Washington desk for a more “Trump-friendly” British face in a few week’s time when, short of being found in bed with Prince William AND Harry, he becomes prime minister. Though it must be said there are far less damaging ways of achieving that result than the Kim Darroch affair.

It may have been anti-Brexit Remainers who teem throughout the upper-reaches of the civil service seeking to scupper the outcome of the Brexit referendum altogether by ruining relations with the US – ever-closer union with which is many Brexiteers’ dream of Britain’s future.

Or it may have been pure carelessness on the part of his excellency, or the Foreign Office or both, and thus a genuine journalistic scoop of the highest order.

Whatever the provenance, the episode puts the tin hat on an extraordinary period of British diplomacy in which a British citizen in Iran has had her prison sentence extended because of the former foreign secretary’s blundering foolishness, relations with Russia have hit rock-bottom, a public slanging match with China has developed over Hong Kong and British skullduggery in recent events there, an Iranian oil tanker has been seized in an act of international piracy off the Rock of Gibraltar, simultaneously infuriating Iran, Syria, and Spain, with whom we will soon be supplicating over a final deal on leaving the EU.

All this in two years! Britain is currently leaderless, rudderless, directionless, and headed for the rocks.

George Galloway was a member of the British Parliament for nearly 30 years. He presents TV and radio shows (including on RT). He is a film-maker, writer and a renowned orator.

GOOGOOSKA: Sevilla vs AS Roma 2-0