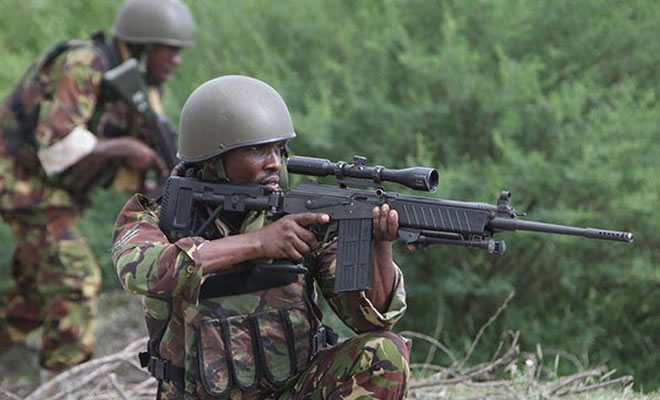 (Hadalsame) 03 May 2019 – Successes and failures in Kenya’s eight-year-long military campaign against al-Shabaab are examined in a recently published history of the African Union Mission in Somalia (Amisom).

Kenya’s 4000-plus troops have contributed to Amisom’s rollback of territory controlled by Shabaab, author Paul Williams finds in “Fighting for Peace in Somalia: A History and Analysis of Amisom, 2007-2017.”

KDF forces have also scored at least two major victories largely on their own, the Washington-based professor recounts.

That same year, a KDF contingent at a base in Hoosingo in southern Somalia inflicted heavy losses on Shabaab attackers while the Kenyan and Somali army defenders suffered no fatalities, Prof Williams relates. About 100 Shabaab were killed in the repulsed assault carried out by “brave but poorly organised” militants. “Good leadership” played a key role in the KDF victory, the author observes.

Prof Williams writes that “probably more than 160” Kenyan soldiers died in the Shabaab attack on Amisom’s El Adde base in early 2016.

As many as a dozen Kenyans were also taken hostage in this one-sided battle, the book adds. It describes the rout at El Adde as the worst defeat ever suffered by either the KDF or Amisom.

In 2017, he continues, between 15 and 30 Kenyan soldiers were killed in a Shabaab attack on a base at Kulbiyow, which is actually inside Kenya though adjacent to the Somalia border.

Kenya’s record in Somalia has been further blemished by the KDF’s reported involvement in charcoal smuggling from Kismayo — an operation that is said to reap millions of dollars for al-Shabaab.

Prof Williams, an international affairs professor at George Washington University, provides no information on this alleged scandal beyond what has been presented in reports by United Nations experts.

He comments only that “Kenyan forces were accused of breaking the UN ban on the export of charcoal, and of confiscating 50 percent of the revenues generated at the lucrative deep-water port.”

The Kenyan government has denied the UN experts’ charge that its forces in Kismayo are complicit in smuggling charcoal out of Somalia.

“Fighting for Peace in Somalia” is published by Oxford University Press and was financially supported by research grants from George Washington University’s Elliott School of International Affairs.

Prof Williams has written extensively on peace operations in Africa, including the AU mission in Somalia.

“I am not an expert on Somalia’s history or politics,” he noted in an email message.

Prof Williams’ book leads readers to the conclusion that Amisom, even in conjunction with US airpower and a still-ineffective Somali national army, cannot defeat al-Shabaab. The insurgents themselves likewise appear incapable of seizing control of Somalia.

“Fighting for Peace in Somalia” takes the view that stabilising the country is “a task only Somalis can achieve.” Prof Williams further argues that the political dimension of the struggle is paramount.

Somalia’s federal government, as well as Amisom, must therefore act in ways that demonstrate their trustworthiness to large numbers of Somalis.

Prof Williams cites unpublished findings of a 2016 Ipsos poll suggesting that Kenya’s and Ethiopia’s Amisom detachments are widely seen by Somalis as constituting armies of occupation.

Only 10 percent of respondents in this survey agreed that Kenyan troops are in Somalia in order to benefit the Somali people. Ethiopian forces are viewed with a slightly worse measure of suspicion, with nine percent of those polled taking a positive view of Ethiopia’s reasons for sending troops into Somalia.

Djibouti, on the other hand, earns a 52 percent favourable rating for its presence in Somalia.

“Many Somalis believed,” Prof Williams writes, “it was Kenyan and Ethiopian policy to keep Somalia weak and divided.”

Kenya’s political role in Somalia has been further weakened by false or misleading statements and the withholding of information, Prof Williams observes.

Amisom has sought to enhance its credibility by establishing a public relations unit designed to issue timely, accurate statements on the mission’s activities in Somalia, the book notes.

But troop-contributing countries have often undercut that effort by lying about their own operations, particularly in regard to illicit trading of commodities and the reporting of their casualties, Prof Williams says.

He quotes British journalist Tristan McConnell as charging: “The tendency of Kenya in particular to lie in its press statements means that we’ve reached the thoroughly disheartening situation in which the terrorists seem more honest than the government.”

Prof Williams points to “the Kenyan government’s incoherent media response to the battles at its bases at El Adde in 2016 and Kulbiyow in 2017.”

Amisom itself, along with each of the countries that contribute troops to it, has refused to release comprehensive figures on casualties sustained in Somalia. Al-Shabaab, on the other hand, routinely issues estimates of the losses it has inflicted on Amisom, although these figures are certainly inflated.

“The lack of a rapid and consistent African Union response to allegations that Amisom had sustained casualties provided al-Shabaab and other critics of the mission with an opportunity to bolster their propaganda,” Prof Williams writes.

He offers his own estimate of Amisom deaths culled from both public and private sources. From 2007 to 2017, Prof Williams calculates, Amisom lost “probably more than 1500” troops. He offers no breakdown by troop-contributing countries.

It is AU policy, he explains, to defer to Amisom’s troop-contributing countries (TCCs) on whether to release information about casualties.

“Some TCCs have released information about specific incidents but no TCC has released an overall total of their fatalities,” Prof Williams explained in an email message, “so all we have is incomplete information.”

Summing up his mixed assessment of Amisom’s past and possible future, the author comments that “no matter what military success it achieved, stabilisation and sustainable peace in Somalia depends on political progress being made on the fundamental questions of national, regional and local governance.”

“And on these issues, for most of Amisom’s first 10 years, Somalia’s political elites failed to reconcile and unite around a shared agenda to defeat al-Shabaab.”