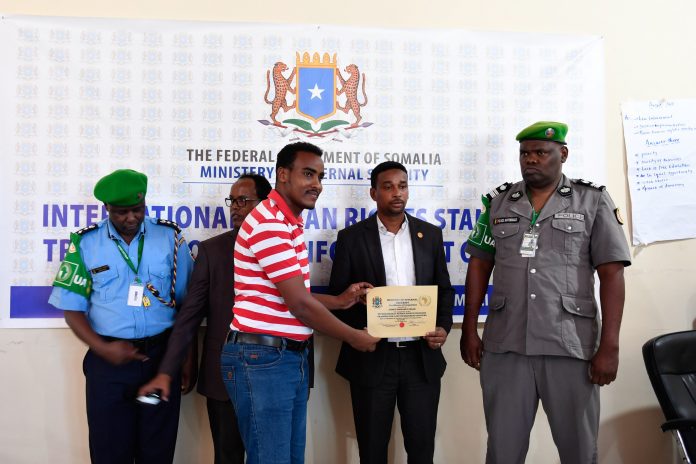 (Mogadishu) 26 April 2019 – The African Union Mission in Somalia (AMISOM) said it has been intensifying training for Somali national security officials to prepare them for the handover of security responsibility ahead of the AU mission’s exit in 2021.

AMISOM said as part of the effort, the security officials on Wednesday completed four-day training on human rights aimed at strengthening transparency and accountability in the country’s law enforcement system.

Francis Ndiema, AMISOM acting police training coordinator said in a statement issued on Friday that the training would go a long way in helping law enforcement agencies uphold the rule of law in their daily functions.

“The course was aimed at enlightening officials from different law enforcement agencies in Somalia on international human rights standards that are relevant in law enforcement to enable them effectively uphold and protect people’s rights,” Ndiema observed.

Ndiema reiterated AMISOM’s commitment to continue building the capacity of the Somali security institutions during the transition period.

“As AMISOM Police, we will continue executing our mandate of supporting law enforcement agencies in Somalia and more specifically the police to take a leading role in maintaining law and order,” he added.

The pan African troops are expected to relinquish the security of the key towns, to the Somali forces, through a conditions based transition plan, to allow them take the lead responsibility as part of the planed exit.