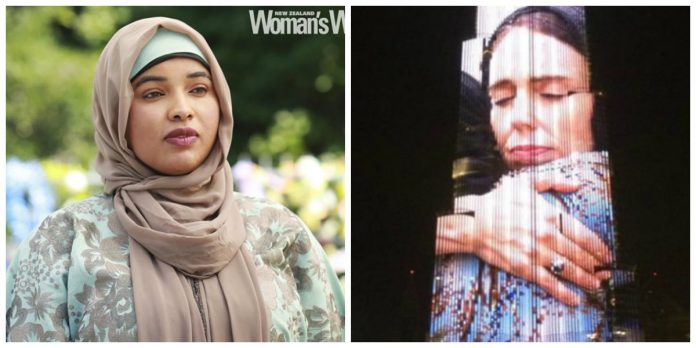 (Wellington) 09 April 2019 – When Somali-born mum Naima Abdi saw a photo of herself being embraced by Prime Minister Jacinda Ardern projected onto the Burj Khalifa, the tallest building in the world, she was left speechless.

In what is being hailed internationally as an iconic image of empathy and unity in the aftermath of the Christchurch attack, the 30-year-old Wellington woman says she counts it a privilege to have shared such a heartfelt and historical moment with Jacinda.

“It was beautiful,” she tells the Weekly. “I don’t even have words for it.

“I was part of New Zealand history and this is something that will stay forever.

“I’m so grateful I was part of this kind gesture.”

Naima, who had gone to the Kilbirnie Mosque to support her grieving Muslim community after the tragedy that saw 50 worshippers killed and as many injured as they fled a hail of bullets, was warmly greeting those arriving with flowers to pay their respects when the Prime Minister arrived.

Despite feeling the pain of her suffering friends, Naima clearly recalls the moment Jacinda, wearing a black hijab, took her in her arms and reassuringly told her, “We’ll get through this together.”

A photographer captured the two women sharing the emotional moment, which featured on the cover of last week’s Weekly.

That same image was projected high onto the side of the 163-storey Burj Khalifa in Dubai. 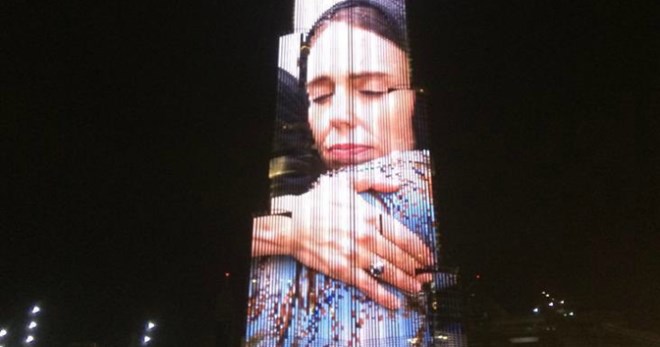 The image of Prime Minister Jacinda Ardern embracing Naima was projected high onto the side of the 163-storey Burj Khalifa in Dubai.

“New Zealand today fell silent in honour of the mosque attacks’ martyrs. Thank you PM Jacinda Ardern and New Zealand for your sincere empathy and support that has won the respect of 1.5 billion Muslims after the terrorist attack that shook the Muslim community around the world.”

More than a fortnight after the attacks, Naima is having good and bad days, and says she’s feeling “a mix of emotions”.

But she remains buoyed by the public support, especially when strangers formed a protective human chain around the mosque when it reopened, and is looking forward to living in a society that will never see a similar atrocity ever happen again.