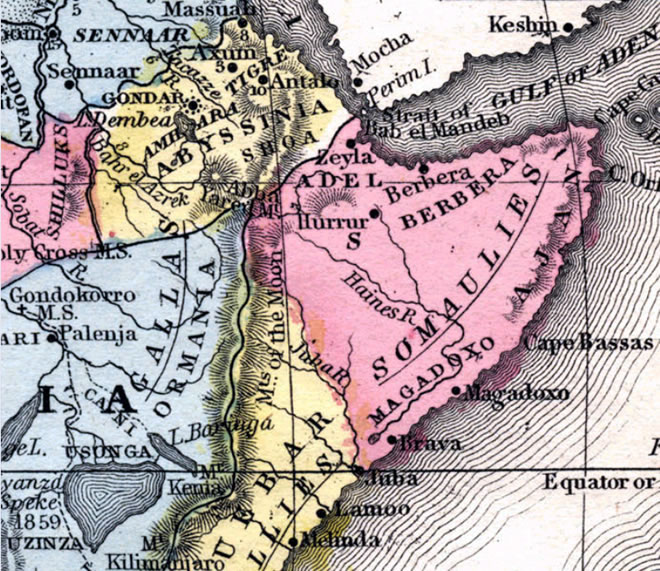 (Hadalsame) 06 April 2019 – The contemporary Somalia attests to be a classical case of failed state, distinguished from that of medieval Somalia cited in the Periplus of the Erythraean Sea and numerous books written in the middle ages as a prosperous country connecting Africa to Arab World and as far as Southeast Asia.

The Moroccan scholar, Abu Abdullah Mohammed Ibn Battuta, considered as the greatest traveller in his time, wrote in his Rixla that Mogadishu – Somali capital – was one of the most affluent cities in 1331, larger than Damascus, which was the capital of Mamluks at the time.

In the words of Ibn Battuta: “Mogadishu is a very large town. The people are merchants and very rich. They own large herds of camels…and also sheep. Here they manufacture the textiles called after the name of the town; these are of superior quality and are exported to Egypt and other places.”

He further described the city as a town of enormous size: “Its merchants are possessed of vast resources; they own large numbers of camels, of which they slaughter hundreds every day (for food), and also have quantities of sheep. In this place are manufactured the woven fabrics called after it, which are unequalled and exported from it to Egypt and elsewhere.”

The civilisation was evident in the city-state as the Sultan sent Ibn Battuta two small welcoming gifts: a plate of betel leaves and areca nuts, and a vial of Damascus rosewater. Mentioning the possession of the ruler from the palace to the mosque, Ibn Batutta made this invigorating description:

Over his head were carried four canopies of coloured silk, with the figure of a bird in gold on top of each canopy. His garments on that day were a large green mantle of Jerusalem stuff, with fine robes of Egyptian stuffs with their appendages underneath it, and he was girt with a waist wrapper of silk and turbaned. In front of him were sounded drums and trumpets and fifes, and before him and behind him were the commanders of the troops, while the qadi, the doctors of the law and the sharifs walked along side him.

People of Mogadishu, as Ibn Battuta observed, were generous, urbane, fat and erudite. In fact, they were genuine followers of Prophet Muhammad’s instruction: “Travel in search of knowledge, even though that adventure takes you to China.”

Piracy was extraterrestrial to Somalis when Ibn Battuta was stormed by Hindu pirates off the coast of India. Medieval Mogadishu, which boasted to be a city-state, was under the rule of Sultan Abubakar Sheikh Omar, who preached tolerant and cohesive Islam dissimilar to born-again ‘jihadists’ whose interpretation of Islam justifies today that murdering innocent civilians is a part of wider ‘jihad’ toward infidels.

Ibn Battuta was not the first to record such an account and chronicle on Somalia, but he was the first explorer to write in detail. Ibn Said and Al-Idrissi were Arab travellers who visited Mogadishu, Merka, Seylac, Berbera and other cities. Most historians agree that cattle and camel were plentiful and meat was in abundance in those cities during this period.

So the sociological and anthropological questions that hunt for answers now are what went wrong, then. How exactly did we get here? The purpose of this article is to examine these questions and attempt to look at how Somalia descended into from Schopenhauerian World to Al-Shabaab’s Shawshank.

It is historically believed that some time in the end of middle ages Somali people began to fight along clan lines, as occurred in 1991 after many years of brutal rule and state fragmentation. Using every metal and weapon available to them at the time, they destroyed ruling kingdom Ajuuraan, which was a powerful empire that ruled Mogadishu and most parts of Somali territory. During the rule of this kingdom, an ancient cotton-weaving industry was profitable in Mogadishu, though people rebelled for rising unpayable taxation and constant fines.

Prior to this time, there were other kingdoms, Ifat and Adal, which ruled other parts of Somalia, even though there still is a historical debate about the ethnic composition of those kingdoms. One finding by Oxford History of Islam reveals that Ifat and Adal, which emerged as major Muslim kingdoms from 1420 to 1560, were Arabs who recruited its military force mainly from Somalis.

Under the command of Ahmed Gurey, the Imam and General of Adal sultanate, Somalis were crucial for the campaign historically known as the Conquest of Abyssinia or Futuh al-Habash in which Muslim population in the Horn of Africa conquered two thirds of Solomonic territories of Ethiopia, defeating Ethiopian Emperor Lebna Dengel along with Portuguese reinforcements.

Most historians in the Horn of Africa acknowledge that strong Somali forces contributed much input to Imam’s victories.

It appears that Gurey’s defeat and death in 1543 by Portuguese sharpshooter marked the beginning of an end for Somalis, who were always deeply divided along clan and sub-clan lines and suddenly started to suffer. It would take many centuries to come to recover a trauma caused by Imam’s death. The result was experiencing Ethiopian expansion and its consolidation of control among nomadic Somalis, European colonisation and post-colonialism period.

Before European settlers; Britain, Italy and France divided Somalia into five territories, the country was at odds into clan fiefdoms. For instance, Mogadishu alone, in this particular time, had two sultans and was divided into two sections: Shingani and Hamarweyne.

It was when French explorer Charles Guillain visited Sultan of Geledi, and Britain’s Richard Burton went to Haji Sharmarke Ali Saleh, the Sultan of Seylac. Some other explorers came also to see clan sultanates in the area, discovering customs, cultures and traditions to pave the way for future colonisation. It should probably be later on when the East African man uttered stridently, “Somalis, Bwana, they no good; each man his own sultan.”

Equally astounding was when certain clans created their own sultanates, imposing their power on others, like Sultan of Bender Qasim and self-styled Sultan of Hobyo. Consequently, each clan had its Sultan and traditional leader as well as a very long hostile history of its own. As clans made traditional boundaries, no-one was authorised to enter the others’ precincts. It was exactly the same way as present-day Somalia when every clan is electing its own president, and fiefdoms and semi-states, like Somaliland, Hiiraanland, Puntland, Ximan and Xeeb, Galmudug, Maamulka SSC, Bartamahaland, to mention just a few, are booming to produce a situation of ‘each sub-clan, one state’ system.

Mohamed Haji Ingiriis is a Somali based in London who writes extensively about Somali history and politics. He has a background with philosophy, media law and administration. He contributes to local London newspapers. [email protected]