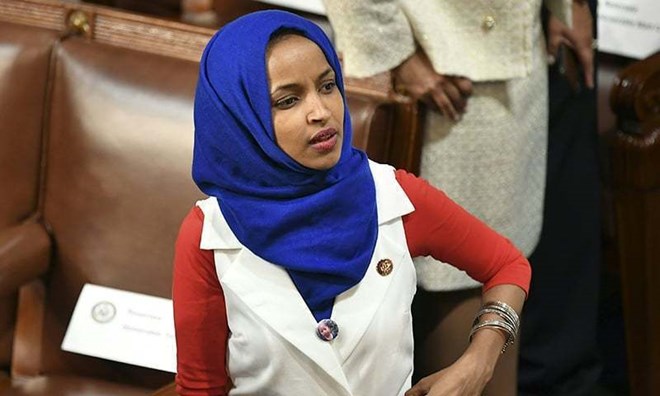 (Washington, DC) 02 April 2019 – SHE is young, articulate and a rare democratic socialist in capitalist America. No wonder Ilhan Omar, 37, a newly-elected Somali-born Muslim member of the US Congress, is under attack from powerful right-wing politicians for pushing her progressive views.

But the more serious onslaught is being unleashed against her by an influential pro-Israel group for having dared to challenge the stranglehold of Jewish diaspora over the US body politic. So far, to her credit, she has refused to wilt under pressure and has reaffirmed her commitment to her faith.

Congresswoman Omar, a Dem­o­crat, drew outrage from American Public Affairs Committee (AIPAC) with her criticism of blind US support for Israel.

She suggested the Republican Party’s support for Israel was driven by campaign donations from a prominent pro-Israel group. Ilhan Omar singled out AIPAC as the source of those donations.

Ms Omar’s comments touched upon a long-running and ugly thread of the anti-Semitic movement — that Jewish money fuels backing for Israel in the United States and elsewhere.

A fresh Democrat, Max Rose of New York, said: “Congresswoman Omar’s statements are deeply hurtful to Jews, including myself.”

The gutsy newcomer has also taken on President Donald Trump, saying that living under his administration is “an everyday assault”.

“It’s an everyday assault. Every day, a part of your identity is threatened, demonised, and vilified. Trump is tapping into an ugly part of our society and freeing its ugliness. It’s been a challenge to try to figure out how to continue the inclusion; how to show up every day and make sure that people who identify with all the marginalised identities I carry, feel represented,” Ms Omar said.

Along with Rashida Tlaib, who is of Palestinian ancestry, Ilhan Omar was one of the first two Muslim women elected to Congress and is the first minority woman to serve as a US representative from Minnesota. She came to the United States at age 12, knowing only two phrases of English, “hello” and “shut up”, according to Wikipedia.

Both President Trump and Israeli Prime Minister Benjamin Netanyahu have targeted her for having boldly exposed them.

In a statement made in the wake of a recent AIPAC conference in Washington, where Mr Netanyahu was a guest speaker, she said: “White supremacist violence is on the rise globally. Right-wing extremists killed more people in the US in 2018 than in any year since 1995. Anti-Semitic violence accounted for 58 percent of religious hate crimes.

“Yet the topic Netanyahu chose to focus on was…me. Netanyahu is in an alliance with Otzma Yehudit, referred to as the Ku Klux Klan of Israel,” she continued. “Its leaders were members of a foreign terror organisation and were involved in attempts to target Yitzhak Rabin.

Yet Netanyahu chose to focus on … me.” “I — like so many others — have not criticised AIPAC because of its membership or the country it advocates for,” she said. “I’ve criticised it because it has repeatedly opposed efforts to guarantee peace and human rights in the region.”

The most controversial part of Ms Omar’s criticism of Israel and its lobbying efforts was a February tweet in which she said politicians’ support for the Jewish state was “all about the Benjamins, baby” — an allusion to one-hundred dollar cur­­rency notes, nicknamed Benja­min because since 1914 Benjamin Fran­klin’s face has appeared on them.

She also raised concerns about “the political influence in this country that says it is OK for people to push for allegiance to a foreign country”.

Ms Omar later apologised for and clarified her remarks, which some viewed as anti-Semitic.

“From this Benjamin, it’s not about the benjamins,” Netanyahu said in his satellite address to the AIPAC conference. And apparently, that’s not all he had to say.

CNN Journalist Nathan Guttman pointed out that Netanyahu’s spee­­ch mentioned “in one word” the Pittsburgh massacre at a synagogue last year. “Ilhan Omar’s comments get an entire paragraph,” he said.

One of the allegations is that Netanyahu accepted gifts worth $300,000 from billionaire friends.

She has many supporters who share her views on AIPAC and the clout the lobby wields over American lawmakers, but she is still in a minority.

Ilhan Omar has shaken up politics in the United States within four months after her swearing in, but whether she would remain consistent amid intensifying pressures remains to be seen.