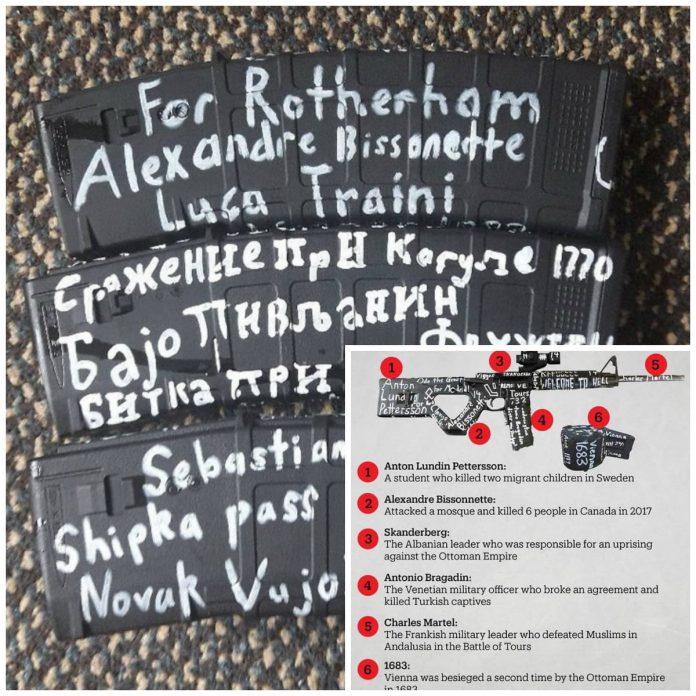 (Christchurch) 15 March 2019 – A white supremacist identifying himself as Australian Brenton Tarrant, 28, has killed at least 49 people and wounded 48 more after carrying out a far-right terror attack at mosques in New Zealand.

During the massacre, which he live-streamed online, Tarrant could be seen using weapons scrawled with white text. He also posted images of the weapons to Twitter before the feed was taken down.

An examination of the text reveals and obsession with historical figures who fought against the Ottoman Empire – the Islamic superpower of its day – other far-right attackers, and the Rotherham sex abuse scandal. 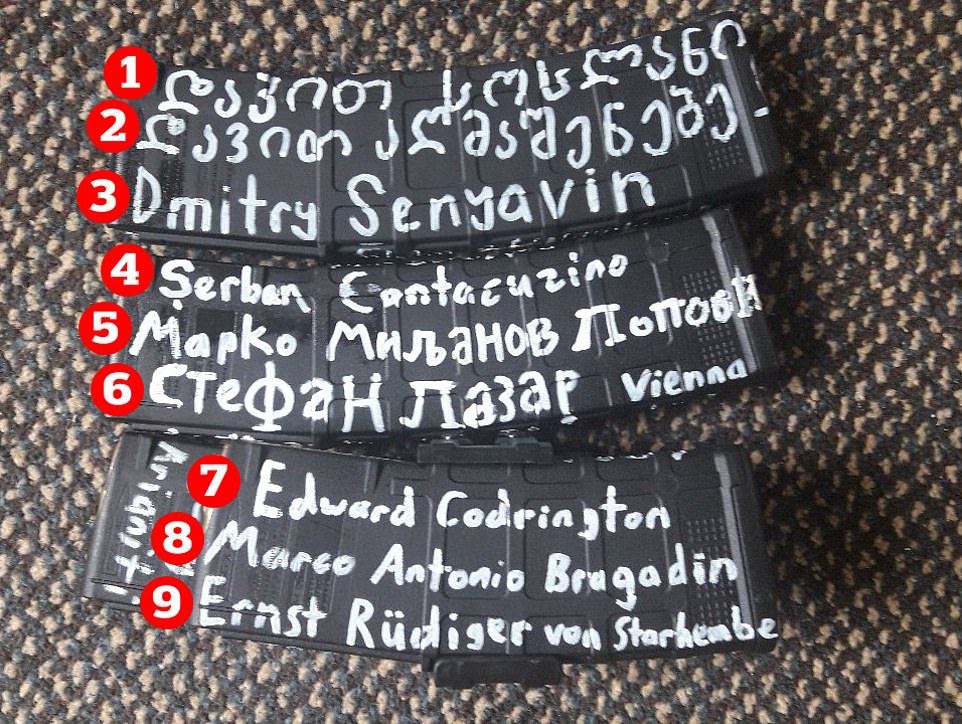 1. David Soslan – A Georgian king of the 12th and 13th centuries, known for his military success in wars against neighbouring Muslim nations

2. David IV of Georgia – Also known as David The Builder, he is considered the greatest ruler in Georgian history. He drove Turkish forces out of the country at the Battle of Didgori in 1121 before bringing most of the Caucasus under his control, ushering in the Georgian Golden Age

4. Serban Cantacuzino – Former Romanian prince who planned to attack and sack Constantinople and drive the Ottomans (Turks) out of Europe

5. Marko Miljanov (misspelled on weapon) – A Montenegrin general who fought several campaigns against the Ottomans and distinguished himself as an able leader

6. Stefan Lazarević – Serbian prince who served as a vassal for the Ottomans before later freeing his country from their rule and establishing an independent state

7. Edward Codrington – British admiral and later Commander-in-Chief who fought in Napoleonic Wars. He also fought against the Turks and Egyptians during the Greek War of Independence, helping Greeks gain independence from the Ottomans

8. Marco Antonio Bragadin – Officer for the Republic of Venice, led the Venetian resistance when the Turks attacked Cyprus. He was killed by the Turkish general after surrendering along with all Christians remaining in the city

9. Ernst Rüdiger von Starhemberg – A military governor from Vienna who defended the city from the Ottomans at the Battle of Vienna in 1683. References to this battle are scrawled in multiple places on the killer’s weapons 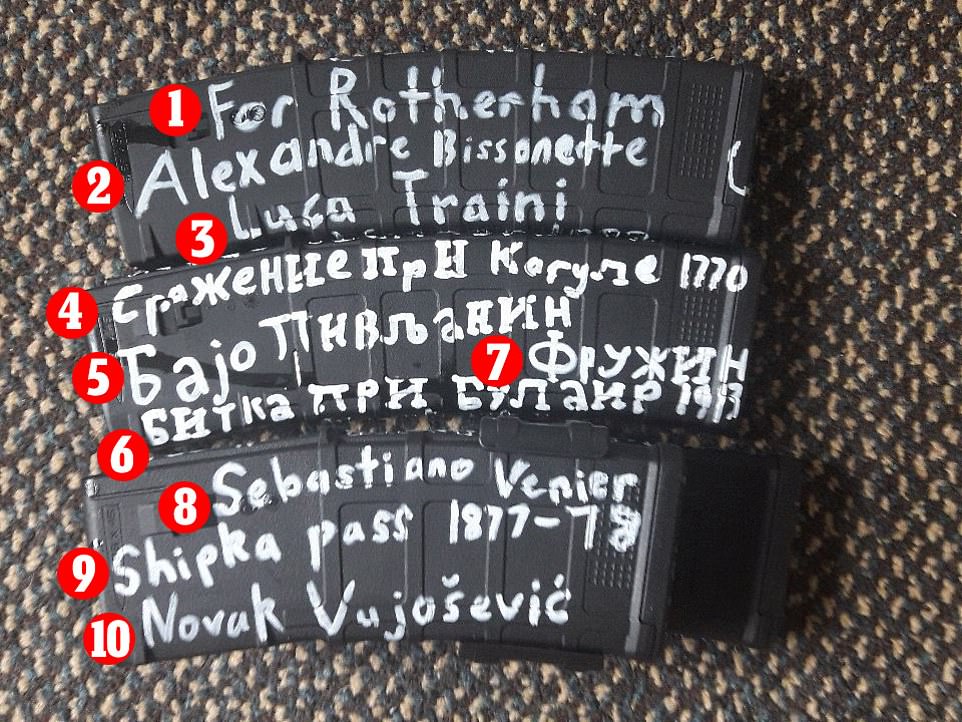 1. For Rotherham – A reference to the Rotherham child abuse scandal, in which a gang of British Pakistani Muslim men sexually abused vulnerable white British girls for decades and went largely ignored by police

2. Alexandre Bissonnette – Perpetrator of the Quebec mosque shooting in January 2017. Six were killed and 19 injured after he opened fire at the end of Friday prayers. Bissonnette is currently serving life in prison

3. Luca Traini – Italian extremist who shot six African migrants in the city of Macerata in February 2017. He was arrested while making a Hitler salute with an Italian flag draped around his shoulders. He was sentenced to 12 years in prison and later apologised for his actions

5. Bajo Pivljanin – Born under Ottoman rule he switched sides during the Fifth Venetian-Ottoman War (1645-1669) to fight against his former rulers and was ultimately killed in battle. He was regarded as one of the greatest hajduks – a type of peasant infantry

6. Battle of Bulair, 1913 – The battle pitted Bulgarian forces against a much larger Turkish force, attempting to break the Bulgarian blockade of one of their fortresses. The Bulgarians were victorious, losing only a few hundred troops compared to thousands killed on the Turkish side

7. Prince Fruzhin – A Bulgarian noble who fought against the Ottoman conquest of the Second Bulgarian Empire

8. Sebastiano Venier – Doge of Venice who fought against the Turks during the Fourth Ottoman-Venetian War (1570-1573). As part of the Christian League, he decisively defeated the Turks at the Battle of Lepanto

10. Novak Vujosevic – Fought in the Battle of Fundina for the Principality of Montenegro against the Ottoman Turks. He killed 28 fighters and was later given an award by the Russian emperor 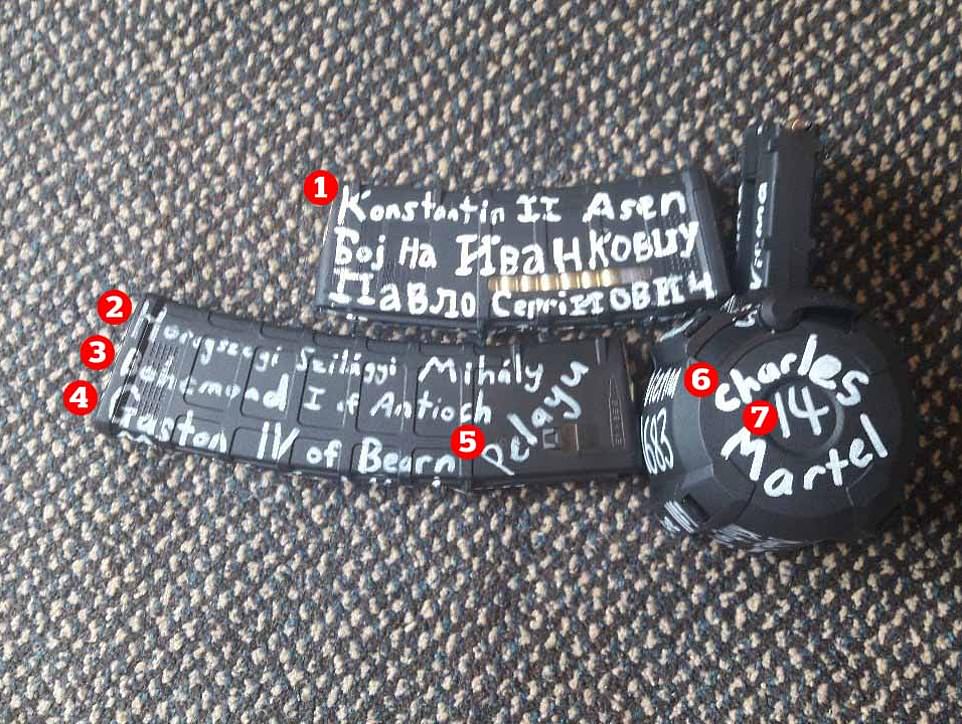 1. Konstantin II Asen – Constantine II of Bulgaria, a Bulgarian noble and ally of Stefan Lazarević, who is mentioned on another of Tarrant’s weapons. He led a rebellion against the Ottomans which lasted for half a decade but ultimately ended in defeat

2. Horogszegi Szilágyi Mihály – Micheal Szilagyi, Hungarian general who was captain of the Belgrade fortress when it came under siege by the Ottomans in 1456. The battle ended in victory for the Hungarians

3. Bohemond I of Antioch – Founded the Norman monarchy in Antioch and led the First Crusade ordered by Pope Urban II to retake the Holy Land from Turkish forces between 1095 and 1099. It led to the re-capture of Jerusalem and the establishment of the Kingdom of Jerusalem

4. Gaston IV of Bearn – A participant of the First Crusade who was the first to enter Jerusalem after the defensive walls were breached

5. Pelayu – Pelagius of Asturias, a Visigoth nobleman who founded the Kingdom of Asturias. He is credited with beginning the Reconquista which lasted from 711 until 1491, and saw Christians retake the Iberian peninsula from the Moors

6. Charles Martel – A Frankish statesman who defeated crusading Moorish forces at the Battle of Tours in 732AD and is credited with ending the last Arab invasion of France

7. 14 – A likely reference to the 14 Words, a white supremacist slogan derived from Hitler’s Mein Kampf 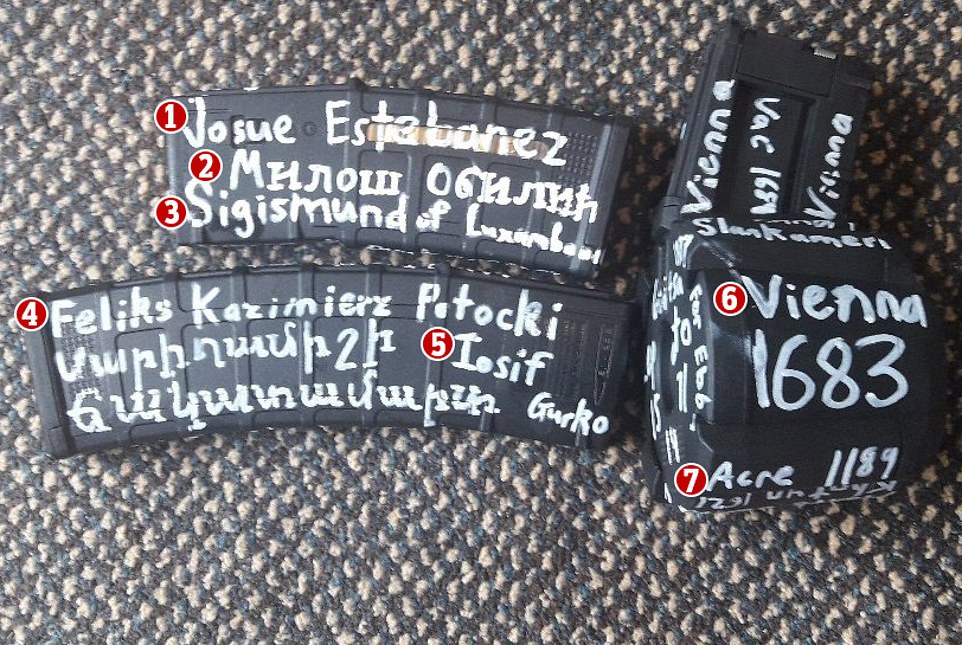 1. Josué Estébanez – A Spanish neo-Nazi who fatally stabbed 16-year-old anti-fascist protester Carlos Palomino in the heart while on his way to take part in an anti-immigration protest in Madrid in 2007. He is currently serving 26 years in prison

2. Miloš Obilić – A knight in the service of Prince Lazar, mentioned elsewhere on Tarrant’s weapons, who fought against the Ottomans during the Invasion of the Ottoman Empire. He is credited with assassinating Sultan Murad I during the Battle of Kosovo, 1389

3. Sigismund of Luxembourg – A European nobleman who rose to be Holy Roman Emperor, he led the Crusade of Nicopolis against the Ottomans in 1396. The campaign was a disaster and ended in defeat, along with the collapse of the Second Bulgarian Empire

4. Feliks Kazimierz Potocki – A Polish nobleman and military leader known for leading numerous campaigns against the Turks and Tatars, including fighting in the Great Turkish War. In 1698, he defeated a force of 14,000 Tatars with 6,000 men at the Battle of Podhajce

5. Iosif Gurko – A Russian field marshal who fought against the Turks as part of the Russo-Turkish War (1877-1878). He led troops at the Battle of Shipka Pass, which is mentioned elsewhere on Tarrant’s weapons

6. Vienna 1683 – A reference to the Battle of Vienna which marked the first time the Holy Roman Empire cooperated militarily against the Ottomans. They were victorious, marking the beginning of the end of Ottoman conquests in Europe

7. Acre 1189 – A reference to the Siege of Acre which lasted from 1189 until 1191, and pitted King Guy of Jerusalem against Ottoman ruler Saladin, who was attempting to retake the Holy Land from crusaders. It ended in victory for King Guy, and formed part of the Third Crusade 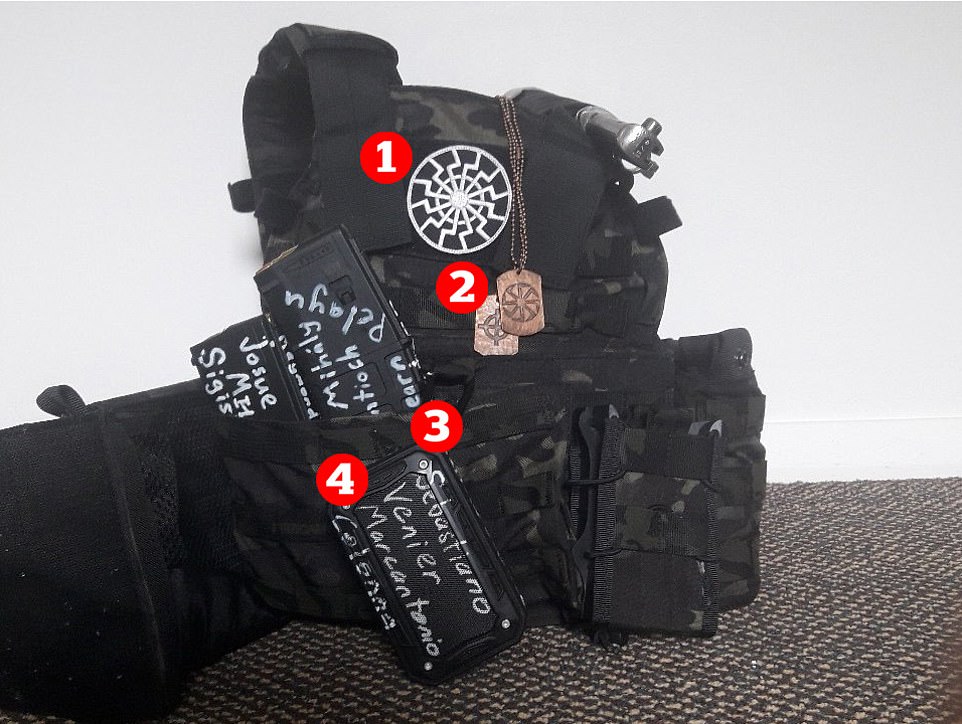 1. Black Sun – A symbol that originated in Old Norse and Old Celtic cultures as the sonnenrad, or sunwheel, but was adopted by the Nazis and then neo-Nazis as the symbol of a pure white race

3. Sebastiano Venier – Doge of Venice who fought against the Turks during the Fourth Ottoman-Venetian War. He is mentioned on another of Tarrant’s weapons

4. Marcantonio Colonna – An Italian aristocrat who was admiral of the Papal fleet at the Battle of Lepanto, in 1571. The battle saw a fleet of the Holy League – an alliance of Christian nations – inflict a major defeat on the Ottomans 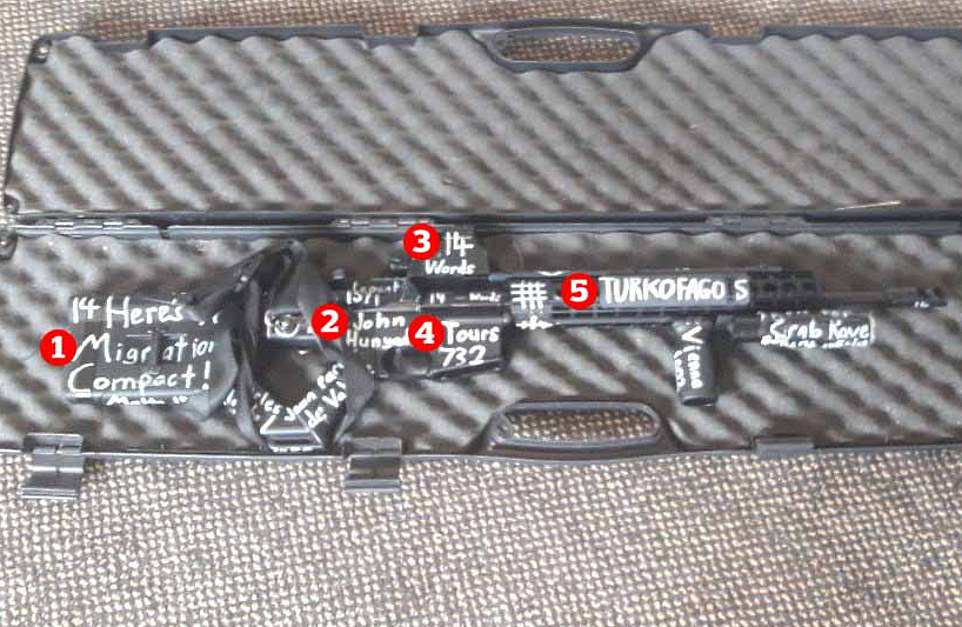 1. Here’s your migration compact! – A reference to the Global Compact for Safe, Orderly and Regular Migration brought forward by the UN after millions of Middle Eastern migrants arrived in Europe in 2016. Among other things, it commits signatories to fighting discrimination against migrants. The compact was bitterly opposed by the far-right

2. John Hunyadi – A leading 15th century Hungarian military figure, he was responsible for guarding the country’s southern borderlands against attacks by the Ottomans

3. 14 Words – A reference to a white supremacist slogan derived from Hitler’s Mein Kampf. The number ‘14’ appears in multiple places on Tarrant’s weapons

4. Tours 732 – A reference to the Battle of Tours in 732AD which ended the last Arab invasion of France. It was won by Charles Mantel, who is mentioned elsewhere on Tarrant’s weapons

5. Turkofagos – A phrase which means ‘Turk-eater’ in Greek, it was the nickname of Nikitas Stamatelopoulos, a revolutionary in the Greek War of Independence which was fought against the Ottomans between 1784-1849